Why the left side does not pull or lead?

To understand let´s analyse a drawing realised from the swing of Tiger Woods representing shoulders, arms, hands, and club shaft and club head from the top of his swing to impact. Mechanically, the hands (1 & 2) and club shaft (3) form a lever and two fulcrums system.  The left hand (1) is the top fulcrum or the one at the butt of the club.  The right hand (2) is the bottom fulcrum or the one closer to the club head. The club shaft (3) is a lever.  The right arm (4) weighs between 10 and 20 lbs. 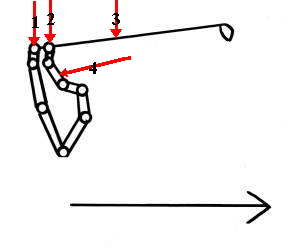 Let´sobserve in the second drawing the downswing position at the waist high position:

* The club head (3) is moving around 30 mph for the average golfer and around 40 mph for PGA players.

* The angle between the left arm and the lever is less than it was at the top.

* There is virtually no change in the left arm's and left hands angular relationship.

* The right arm (4) has large angles between the upper arm, forearm and the right hand (potential energy). 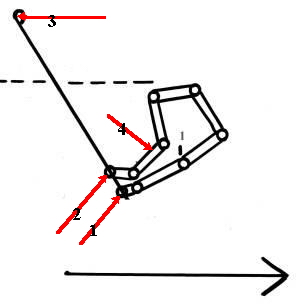 For the left side to pull the right side around, the top fulcrum (1) would have to pull the weight of right arm, club shaft and club head.  The amount of pulling would be minimal due to the fact that the left hand fulcrum, at 0.05 sec before impact, is in its most disadvantaged position (biomechanically weak).

Let´s analyse the third drawing, from the 0.05 seconds before impact position, PGA players can go from 40 mph to over 130 mph.  The average amateur goes from around 30 to 90 mph.

Observation of the drawing shows:

*If the left hand were going to create club head speed, it would have to move in the direction of the (1a) red arrow.  Since this never happens, the major function of the left hand is to stabilize and support the right arm speed producing mechanical system.

* The three levers of the right arm (4) have straightened and fulcrum (2) has reached alignment with fulcrum (1). 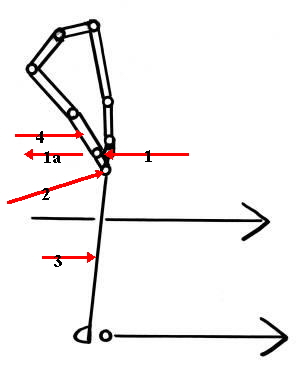 The left side, due to its disadvantaged mechanical system, is mainly in a role of support.